‘The Best of The Best’

‘He was magical to ride – I could have sat on him all day – one of the best rides I have ever had. He is powerful, mannerly and a great galloper. He is a tremendous credit to his owner/breeder, his producer and his very capable rider.’

‘I judged each animal on its merits according to type. He was a nicely balanced horse that moved well and has a good gallop. He is a good type with a very nice temperament.’

A wonderful temperament;
bred to compete in all Sport’s Horse disciplines

Brechfa Brynach is a stunning looking young stallion, with a wonderful temperament. As a 2 year old and a 3 year old he was In-hand Champion at County level in both Coloured and Sports Horse classes. His sire is the result of crossing two of the most influential jumping pedigrees and his dam was a high scoring BSJA competitor. His breeding shows in his straight movement; excellent show-jumping and natural cross country ability.

Brechfa Brynach resumed his showing career at the end of 2011.

Go to Foals and Youngstock to see Brechfa Brynach’s foals. 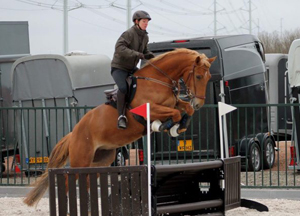 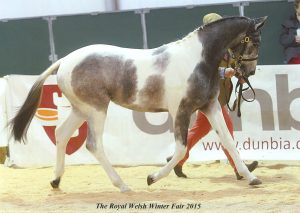